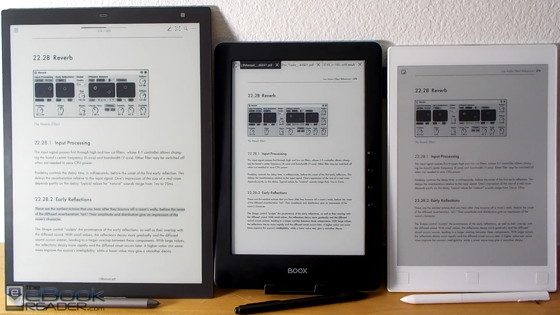 Each device has its own particular strengths and weaknesses, but they share a number of similar features.

All three have large E Ink displays, all support PDF format, and each comes with a stylus for writing and drawing on the screen (not all N96 models support stylus touch, but I’m comparing the Boox N69ML Carta for this review).

Note that there’s also the Onyx Boox Max Carta that has the same 13.3-inch screen as the Sony, but it costs twice as much as the N96.

After using the N96, I wouldn’t recommend spending that much considering the outdated OS, the iffy touchscreen, slow processor, and lack of capacitive touch. Perhaps the Max Carta 2 can live up to the high price when it comes out.

The Sony DPT-RP1 is Sony’s second generation digital paper device. It has a 13.3-inch E Ink Carta screen, 16GB of storage space, Wi-Fi and Bluetooth (both for file transfers only), and the touchscreen supports both stylus and finger touch. See review for full details:

The Remarkable Paper Tablet is a 10.3-inch E Ink ereader and digital notepad. At this point the Remarkable is geared more toward writing and drawing but it supports PDF and ePub formats as well, and the touchscreen works with both finger and stylus touch.