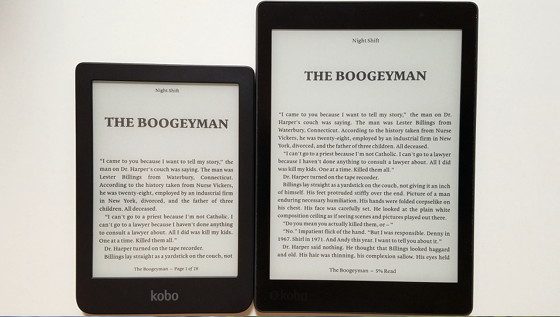 The Kobo Aura One and Kobo Clara HD are at two opposite ends of Kobo’s ereader lineup. Obviously the biggest difference between the two is the size. The Clara HD has a 6-inch screen and the Aura One has a larger 7.8-inch E Ink screen.

The Kobo Clara HD is more toward the budget end of the spectrum design-wise, with a price of $129. The Kobo Aura One has more of a premium feel with a flush glass screen and thinner design. It’s also waterproof, and it costs $100 more at $229.

Both have 300 ppi E Ink screens and similar overall specs with 8GB of internal storage, and both have a Comfortlight Pro to adjust frontlight color.

Kobo ebook readers run the same software so there’s no difference in terms of overall features. The one exception is the Kobo Aura One is the only Kobo that supports downloading library ebooks directly from public libraries through OverDrive.

With all other Kobos, including the Clara HD, you have to sideload library books using a computer and Adobe Digital Editions software, which is a hassle, so that’s a big advantage for the Aura One if you read a lot of library books.

Another plus for the Clara HD is the touchscreen is more accurate and responsive. The Aura One’s touchscreen is sometimes a bit off and requires multiple presses, especially in the corners.

The Clara HD is on the small side compared to most other 6-inch models, and the Aura One is a unique size with its 7.8-inch screen. It’s hard to get a sense of size from pictures online so I wanted to post a quick video review comparing the two. Keep in mind that frontlights can vary a lot from one to the next so things might look completely different with two other Kobos.

See the full reviews for more details about each model: