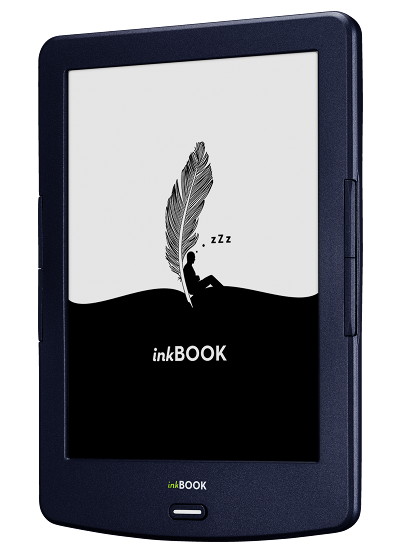 In addition to the 7.8-inch InkBook Explore that recently went up for pre-order, InkBook has also released a new 6-inch entry-level ebook reader called the InkBook Lumos.

Basically it looks like they took the InkBook Classic 2 and added a frontlight with adjustable color temperature. Otherwise the specs and design appear the same, except the Lumos has a USB-C port.

Another difference is the InkBook Lumos runs Android 4.4.2 instead of Android 4.2.2.

Update: Their initial specs were wrong. It turns out it doesn’t have a USB-C port and it runs Android 4.2.2.

Plus it has a microSD card slot that supports cards up to 32GB.

Like the InkBook Classic 2, the InkBook Lumos has a 6-inch E Ink Carta display with a resolution of 800 x 600 (167 ppi). Almost all frontlit ebook readers have at least 212 ppi so the low resolution is a downer but it does add the temperature control for the frontlight and it’s an entry-level model so it’s not very expensive.

The InkBook Lumos is currently selling from the InkBook website for €99. The regular price is €109.

They’ve also started selling the InkBook Lumos on Amazon for $99 as well.