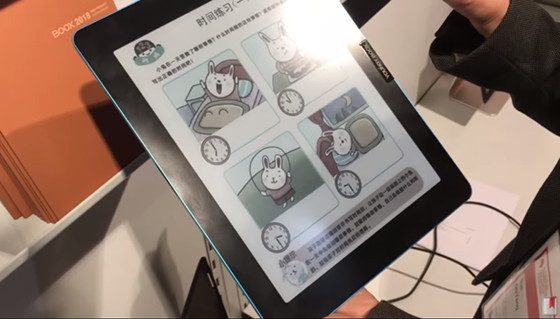 Onyx recently showed off a 10.7-inch ereader with a color E Ink screen that was designed specifically to use as part of a pilot program for schools in China.

Color E Ink screens have been around since 2010 when E Ink first released their Triton displays.

A few devices were released using color E Ink displays, including the JetBook Color, but they didn’t sell well at all, mostly because the colors were simply too faded and the screen looked too dark and gray.

Ever since then color E Ink sort of faded into obscurity.

E Ink has made some advancements with color shelf displays and digital signage, but they stopped talking about color ereaders a long time ago.

E Ink has demoed some impressive color ACeP displays at trade shows, but up to this point they have only shown interest in using them for digital signage—apparently the resolution is still too low for ereaders.

Onyx is using a regular E Ink screen with a color filter over the top, which reduces the resolution to 150 ppi, but it adds red, green, and blue colors.

Even though it’s something that isn’t available to purchase, it’s good to see that color E Ink is still a possibility on future reading devices.