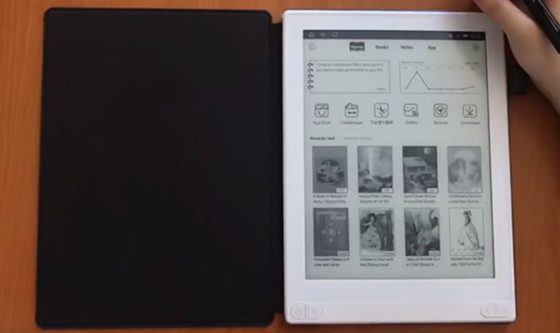 Boyue is getting set to release a new ebook reader and digital notepad called the Likebook Mimas. It’s basically an upgraded version of the Likebook Note that turned up over the summer for awhile.

With Android 6.0 and a 1.5GHz octacore processor, it’s a lot like the Likebook Mars that was released a couple months ago, but the Mimas has a larger 10.3-inch E Ink display and they added stylus support for writing on the screen.

But what’s really cool about the Likebook Mimas is the fact that it has a frontlight, with warm and cool colors.

Other 10.3-inch models like the Onyx Boox Note and Sony DPT-CP1 lack the frontlight option.

The Mimas has page buttons and a dedicated back button and home button as well.

In the YouTube description it says it has a Wacom touchscreen with 4096 levels of pressure sensitivity, which matches the 10.3-inch Onyx Boox Note. It also has a capacitive touchscreen for finger touch.

Early specs suggest the Likebook Mimas has 16GB of storage space and 2GB of RAM, with WiFi and Bluetooth, USB-C, a microphone, 3.5mm headphone jack, and it has a microSD card slot for expansion.

According to Boyue’s Twitter page, the Mimas is expected to get released this month in China and internationally in December.