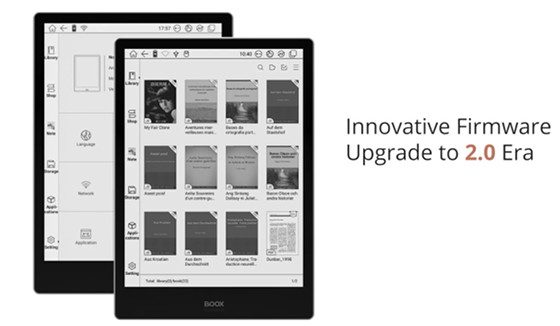 The new 2.0 software version adds a new user interface and some new features, including a number of new options with the notes app and they finally added two-page landscape view.

You can find the update files on Onyx’s website, or you can auto update from the settings menu on your device.

I installed the update on my Onyx Boox Note over the weekend and so far I absolutely hate it.

The text seems thinner and more washed out, for one. The new shop section is just pointless nonsense to anyone who doesn’t read Chinese.

Google Play is gone and you have to go through the hassle of setting it up again. Dropbox was removed from Note syncing so I had to set that up again too. There are some other minor annoyances as well that makes the new software seem rather amateurish, but I’ll give it a week or two before deciding to go back to the older software or not.

If you missed the earlier post, it includes a short video showing off some of the new features.

Here’s the list of changes with the 2.0 update, weird formatting and all: