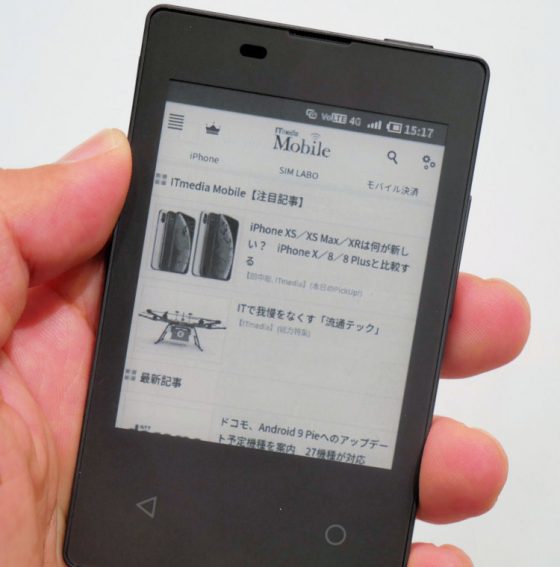 Not very many interesting E Ink devices have turned up at the annual Consumer Electronics Show in Las Vegas in recent years, but at least there are a couple of new things to talk about this year.

One interesting new device is the Kyocera Card-Keitai, which is a tiny E Ink phone that was recently released in Japan. It’s not much larger than a typical credit card, although obviously it’s thicker at 5.3mm.

It has a 2.8-inch E Ink screen and the device only weighs about 47 grams.

It runs Android and has a few apps pre-installed, including a web browser.

There have been a few other E Ink phones but none have been very successful.

The Yotaphone is probably the most popular, along with Hisense’s E Ink phones, but those are dual-screen devices with the E Ink screen on the back.

The Kyocera Card-Keitai only has an E Ink screen so it’s not nearly as advanced as the dual-screen phones, but it’s meant to be more of a complementary device.

Personally I’m not big on the E Ink phone concept but I’d love to see super portable smaller ereaders like this. Granted a 2.8-inch screen is probably too small for reading but a 4.3-inch E Ink screen would be perfect for an on-the-go ebook reader.