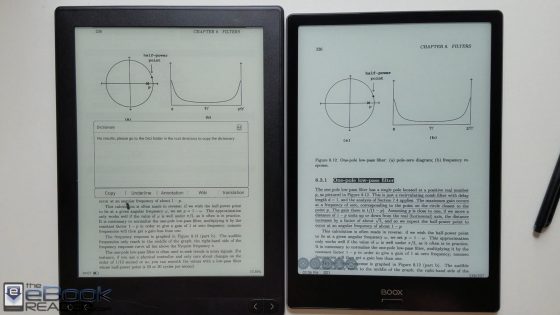 Here’s a comparison review between the Likebook Mimas and the Onyx Note Pro.

On the surface they are two very similar devices. Both have 10.3″ E Ink screens with adjustable frontlight color. Both run Android 6.0 and can install Android apps. Both have Wacom touchscreens for writing and drawing on the screen and annotating PDFs.

There are a lot of overlapping features, but when you dig closer and start using both devices at the same time, the Note Pro is clearly the superior device in virtually every way.

If you’re a big Likebook fan you’re going to hate this review. It’s going to sound like I’m majorly favoring Onyx, but really that’s not the case at all. I’m just being honest.

Onyx’s software isn’t anywhere close to being perfect. It has some annoying bugs and the user interface is awkward to use at times, and I’m not a fan of the new homescreen layout at all. But the Likebook software is like a half-assed version of it with far less features and there’s not a single thing it does better.

With most comparison reviews I simply layout the facts and let you decide which one is best for your own personal usage. Generally there isn’t one clear winner because each device usually has it’s own set of pluses and minuses.

But when it comes to comparing the Likebook Mimas with the Onyx Boox Note Pro, there really isn’t anything the Likebook is better at than the Note Pro. In fact it’s pretty much worse at everything.

The Likebook does have a couple notable hardware advantages with the microSD card slot and page buttons, but in this case they’re simply not enough to make up for the software deficiencies.

The Likebook Mimas isn’t a bad device. It’s perfectly usable in it’s own way, but when comparing it to the Note Pro it’s like comparing a Kindle to a Nook. Sure, the Nook has a few things going for it with page buttons and a really nice clear screen with adjustable frontlight color, but when it comes to comparing the software with a Kindle it isn’t anywhere close to the same level.

I wish Likebook’s software was more polished to give Onyx more competition, especially since the Likebook Mimas is over $100 cheaper than the Onyx Note Pro, but the Likebook isn’t exactly cheap at $480. For that kind of money they can’t get away with cutting corners on software development.

I guess if you only want to use 3rd party apps then the Likebook’s software issues won’t matter as much, but the stylus is only going to work well for writing with the built-in apps.

Both run Android 6.0.1 and can install apps, and both have the option to enable the Google Play Store.

Similar performance with the octa-core and quad-core processors (there really is no advantage with having more cores).

Both have Wi-Fi and Bluetooth and capacitive touchscreens.

The frontlight makes the screen look more paperlike, with a lighter tone. The frontlight is also slightly brighter and more evenly lit.

Slightly less reflections and glare with the glass screen, contrary to what you’d expect.

Frontlight colors can easily be blended (there’s a separate app for the Likebook but it’s written in Chinese and is buggy).

Better note app, with a number of additional features.

Better highlighting and underlining (selecting text on the Likebook is so bad it’s basically nonfunctional).

Faster in most respects.

(I could list 20 more software advantages for the Note Pro but quite frankly I’m bored at this point).

Comes with bigger and nicer stylus (but it lacks a side button).

Personally I like the homescreen layout better, with the ability to open apps and set custom shortcuts.