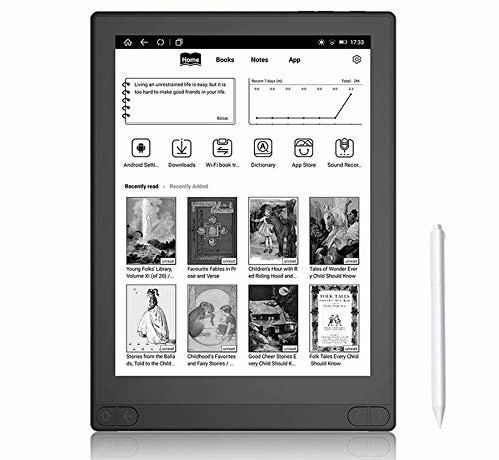 The Likebook Mimas, model number T103D, is a 10.3-inch E Ink notepad and ereader from a company based in China called Boyue.

The Likebook Mimas is very similar to the 7.8-inch Likebook Muses that I reviewed a couple months ago. The custom Android 6.0 software is pretty much the same but the Mimas adds a microSD card slot, a headphone jack, and buttons for page-turning.

Like the smaller model, the Mimas has a Wacom touchscreen, Wi-Fi, Bluetooth (for keyboards and speakers), USB-C, a 1.5GHz octa-core processor, 2GB of RAM, dual speakers and a mic.

The Likebook Mimas currently sells for $479. If you’re not familiar with these types of devices that probably sounds high, but not when compared to similar models. It’s actually $120 less than other 10.3-inch ereaders like the Note Pro, Sony DPT-CP1 and Remarkable.

The Likebook Mimas has a 10.3-inch E Ink screen with 227 ppi. I really like the 10.3-inch screen size. It’s big without being too big. Frankly the 13.3-inch models are a little unwieldy and cumbersome to lug around.

There’s an added protective layer over the front of the screen that’s hard so it doesn’t really feel any different than writing on the glass screen of the Onyx Note Pro.

Along with the Onyx Boox Note Pro, the Likebook Mimas is one of the first larger-screen ereaders to have a frontlight. It has cool and warm color settings, and there’s an app that lets you blend the two. 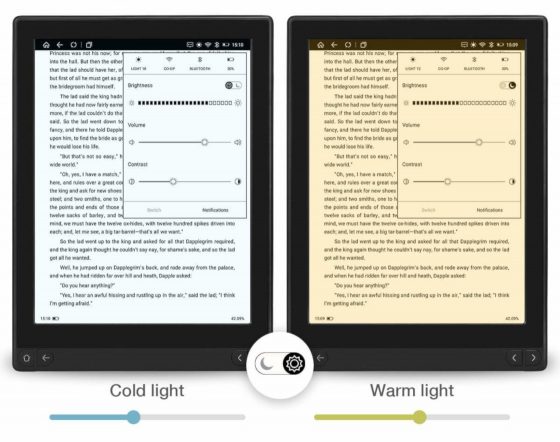 The frontlight is slightly dimmer at full brightness with the larger screen, and it’s a little brighter in the lower left corner, but overall the light looks good and it helps make the background appear lighter and the text stand out more.

Another advantage with the Mimas is the fact that it has physical home and back buttons, plus page-turn buttons. I’m a big fan of having page buttons on reading devices. You can even use the buttons with apps that support using volume buttons to turn pages. The only problem is with the built-in reading app there’s an annoying bug that sometimes makes the page buttons not work, which requires restarting to get them working again.

The overall size is a bit larger than other 10.3-inch ereaders and it weighs 444 grams. Compare that with Sony’s 10.3-inch model that only weighs 234 grams. Even the Note Pro with the added glass screen only weighs 390 grams. The Likebook does have a larger battery so that can partially account for the extra weight.

When it comes to the software it’s basically the same story as the Likebook Muses. It runs Android 6.0.1 and is open to install apps. It comes with a few apps pre-installed, including a basic appstore with a few reading-centric apps like Kindle and KOReader. It has Google Play Store access as well if you go into application settings and enable Google Framework.

The Kindle app available is an old version from several years ago that doesn’t support the newer format or newer features. It works fine (and the page buttons even work with it) but it’s majorly outdated. I tried installing a newer version but it would not work. That’s the kind of thing to expect when using Android ereaders. Getting 3rd party apps to work is hit or miss, and it requires a lot of patience to get everything setup.

The performance of the Wacom stylus is pretty much the same as all the other Wacom-equipped E Ink ereaders. There’s an included Notes app with several templates, and you can load your own. You can also use the stylus to write directly on PDF files.

The included Note app on the Likebook Mimas is fairly basic but it works well enough. Here’s the list of features:

The included ebook app has a number of flaws. Basically it makes up it’s own styling rules instead of following conventional standards so it’s pretty much worthless.

However, the app is serviceable when it comes to PDFs. It suffers from excessive ghosting issues so you do have to set page refresh frequency to every page. But it does have some usable zoom modes to get rid of margins, and you can use the stylus to write notes directly on PDFs. The main issue is text selection does not work well with PDFs so if you do a lot of highlighting or looking things up in the dictionary look elsewhere.

Here’s the Likebook Muses PDF review for a list of all the PDF features. Everything is mostly the same with the larger Mimas, except they’ve since fixed the issue of handwritten notes overlapping menus.

It’s hard to recommend the Likebook Mimas because of the flawed software, but there are still things to like about it and it’s perfectly usable in its own way. The Onyx Boox Note Pro is the superior device in most respects when comparing both side-by-side, but the Likebook Mimas costs over a $100 less and offers many of the same features.

It’s just a matter of what features are important to you and how you plan to use the device. The Likebook Mimas doesn’t fair well against the Note Pro, but I’d still take it over a Remarkable or Sony DPT-CP1 any day. The Likebook Mimas has some flaws but it also has a frontlight, page buttons, a memory card slot, and the open Android operating system adds a lot more functionality.