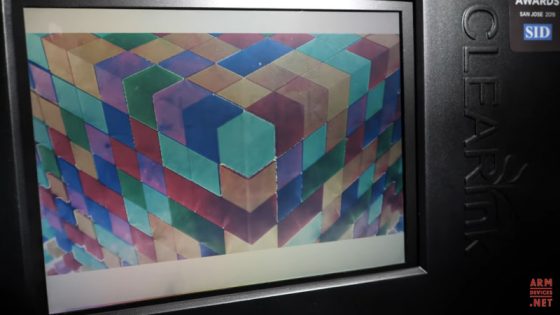 Clearink is a new low-power color display technology that is attempting to take a bite out of the LCD market, largely as part of the education sector with tablets and basic laptops.

Lenovo recently invested in Clearink so that’s a good sign for the company moving forward.

And Clearink won the People’s Choice Award at SID’s Display Week so the technology is clearly something people are interested in.

The only problem with Clearink is they’ve been saying they’ll have a commercial product available “next year” for like 5 years now. Then every year they show off another half-finished prototype that isn’t anywhere close to being a usable product.

Hopefully Clearink can eventually get a working product on the market, unlike all the other low-power color display technologies that have come and gone over the past 10 years.

I can’t help but point out the irony of Clearink using LCD TV monitors to advertise their Clearink displays at their SID booth.