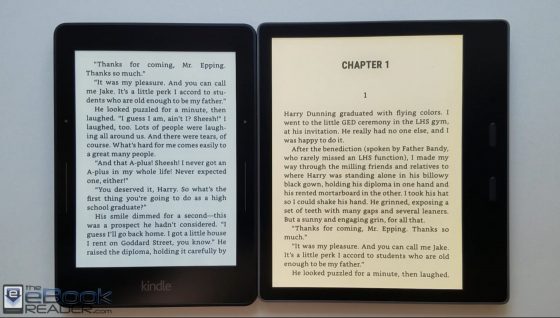 Released in 2014, the Kindle Voyage was Amazon’s first “premium” Kindle, with more features and a higher-end feel than the less expensive Kindle Paperwhite that sold along side it.

The Kindle Voyage has since been replaced by the Kindle Oasis as Amazon’s premium model. Amazon has released three different versions of the Kindle Oasis since 2016, and they never have released a second generation model of the Voyage.

Despite that, the Kindle Voyage still has a loyal following to this day.

It has gained sort of a mythical quality because of its super clear screen, which still has better contrast of any Kindle past or present.

Whenever a new Kindle gets released, people want to know if the screen is as good as the Voyage’s. The answer is always no. For whatever reason the front glass layer they used on the Voyage had a clearer quality to it than the layers they are currently using on the Oasis and the Paperwhite.

The Kindle Voyage wasn’t perfect, however. As good as the screen was, the frontlight had some flaws. Some are pretty good, like the one shown in the video below, but others had weird colors and uneven lighting.

The Kindle Oasis has a much nicer frontlight, especially with the new warm color feature. But just like before with the other Oasis models, the Voyage has slightly darker text and a whiter background.

It’s not a big difference but it makes it seem like the Voyage has a higher resolution screen, when in fact both have 300 ppi E Ink Carta screens. The difference is more apparent in bright light outdoors. I tried showing this in the video but it doesn’t show up as well as it does in person.

I can see why some people still prefer the Voyage, especially with the smaller, more pocketable design than the wider, more unusual design of the Kindle Oasis. It’s a shame Amazon hasn’t released another premium 6-inch Kindle.

For the most part all the main reading features are the same between all the Kindles released in the past 6 years, but the Oasis has a couple of the newer features that Amazon hasn’t added to the older models, like inverted mode and the ability to turn off the touchscreen.

Here’s a list of the main differences with the Kindle Oasis compared to the Kindle Voyage.

Bluetooth support for audiobooks and a VoiceView screen reader (text-to-speech).

The Oasis has physical page buttons instead of sensor buttons with haptic feedback.

Rotation sensor to switch between right and left hand.

Inverted mode for reading with white text on a black background.

You can disable the touchscreen to avoid accidental presses.

There’s a large display mode to increase the size of text and images on the screen.