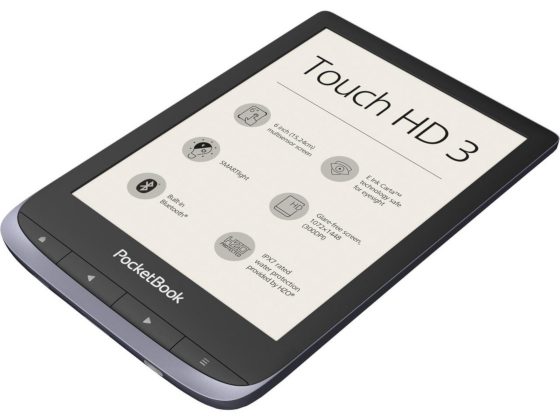 I recently ordered a new Pocketbook Color after they started selling them on Newegg, and while most people would probably focus on the color E Ink screen, the first thing that jumped out to me was how much I like Pocketbook’s design.

The design isn’t unique to the Pocketbook Color; all of Pocketbook’s ereaders have the same general design, including the 7.8-inch InkPad 3 and the 10.3-inch InkPad X.

What I like best about the design is the placement of the buttons below the screen.

To me that is the best design concept for a dedicated reading device.

Some people like having page buttons on ebook readers, and some don’t. With this type of design it appeals to both sides. If you want to use the page buttons you can, but if you’d rather use the touchscreen to page forward and back you can do that easily as well.

With devices like the Kindle Oasis and Kobo Forma they are forcing you to use the page buttons. Some people don’t like the offset design that makes the device a lot wider and less portable. Some prefer the standard design like the Kindle Paperwhite, but that type of design doesn’t appeal to folks that want to use page buttons. Pocketbook has figured out a way to appeal to both sides and I think it’s a great idea (Sony’s ereaders used to have a similar design so it’s not like Pocketbook invented it, but they are doing it better by not having the buttons stick out).

Another thing I like about the Pocketbook Color is it has a recessed screen, so you can hold it by the side without your thumb overlapping the screen and accidentally triggering the touchscreen. As I’ve said in the past, flush screens are overrated and add nothing to the reading experience—in most cases the added layer just makes the E Ink screen look worse.

Kobo really should consider copying Pocketbook’s design moving forward instead of copying the Kindle Oasis’s design. Amazon should do the same, especially with their 6-inch Kindles. Make the page buttons blend in with the lower bezel so people can use them if they want to, and if not they aren’t in the way at all and aren’t easy to accidentally activate, and best of all they aren’t drastically changing the overall shape of the device. It seems like common sense, right?

Update: I decided to change the title of this post from “the best design” to “a great design” because after further reflection it’s not that Pocketbook’s design is necessarily the best, although I think it’s probably the best current design for a 6-inch device, it’s their approach that I think is the best among current options. Most current designs for reading devices force the user to either use page buttons or a touchscreen to page forward and back. I think offering both at once is the best option so the user can decide which they’d rather use.