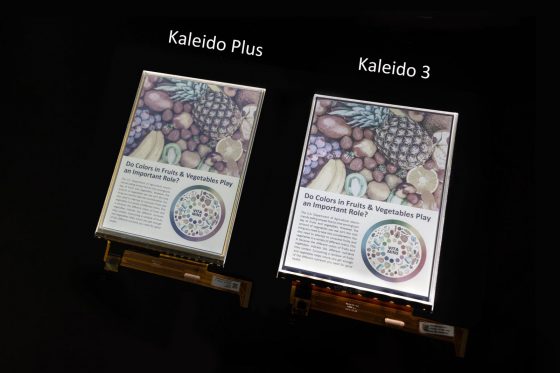 A couple days ago E Ink issued a press release announcing the release of their next generation color displays called Kaleido 3.

They don’t really give many details about the improvements; they just say color saturation has increased by 30 percent compared to their previous generation Kaleido Plus screens, but they don’t say under what lighting conditions.

The new Kaleido 3 screens are available in several common sizes, including 7.8-inches, 10.3-inches, and 13.3-inches.

The Kaleido 3 screens still support 16 levels of grayscale and 4096 colors like previous iterations, and it’s still a black and white screen with a color filter array placed over the top so the color resolution is considerably lower (100 ppi) than the black and white resolution (300 ppi).

The new screens also have a new and improved frontlight designed by E Ink called ComfortGaze that’s supposed to reduce the amount of blue light reflected off the screen.

They fail to give any details beyond that, but you can see a difference in the picture above, although the screen on the right appears to have more light on it so it’s hard to tell for sure.