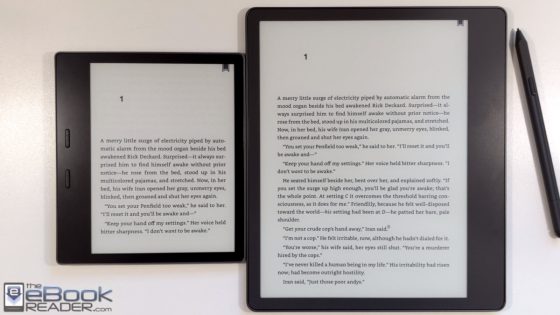 Here’s a quick comparison video between the new Kindle Scribe and the Kindle Oasis.

Mostly I wanted to show the size difference between the 7-inch Kindle Oasis and the 10.2-inch Scribe because it can be hard to get a sense for just how large 10-inch ereaders are compared to regular ereaders.

Software-wise there’s really not much difference between them other than the Scribe-specific features like writing in notebooks and being able to write on PDFs and add sticky notes to ebooks.

The Kindle Oasis is a previous generation model, dating back to 2019 (actually the design goes all the way back to 2017 with the Oasis 2) so it still has an older microUSB port and the base model has half the storage space as the new entry-level Kindle. But it is waterproof, unlike the Scribe.

The big question remains: Is Amazon ever going to release a new Kindle Oasis, or is it going to be discontinued? The Oasis has been outdated for over a year now compared to the Kindle Paperwhite Signature Edition, which has several upgrades over it, so at this point it’s not looking good for the Oasis line moving forward. Personally, I think it will be discontinued if they don’t release a newer version within the next 6 months.

Starting at $339, the Kindle Scribe is a better value for the price than the Kindle Oasis, which I always thought was overpriced by at least $50 for what it is compared to other Kindles. The Kindle Oasis starts at $249 for the ad-supported model with 8GB. That’s just ridiculous compared to the Signature Edition Paperwhite that has 32GB of storage, no ads, and wireless charging for $189. If you have an older Kindle to trade, you can basically get the Scribe for the same price as the 8GB Oasis without ads. How does that make sense? That’s another nice thing about the Scribe—there aren’t any ad-supported versions so the price is basically $20 less than other Kindles, comparatively speaking.

At any rate, both Kindles are nice devices with a similar premium look and feel. The Oasis is a lot lighter and more comfortable to hold, and it’s the only Kindle with dedicated page-turn buttons. The Scribe comes with a stylus and adds some notebook functionality, and the larger screen is great for larger-form content like PDFs and comics, and the larger font sizes are more useful than with smaller Kindles, but the added weight and larger size can make it more difficult to hold.