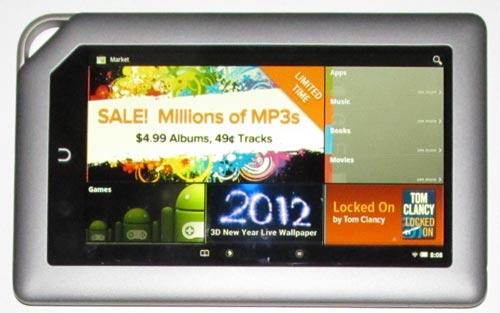 Below is a step-by-step tutorial that includes a video walkthrough on how to root the Nook Tablet, install the Android Market, block OTA firmware updates, and other goodies—everything you need to turn it into a proper Android tablet not controlled by Barnes and Noble. Plus you can choose to keep the Nook’s regular features too, or remove them altogether, it’s your choice.

When Barnes and Noble first released the Nook Tablet, it came with a convenient loophole that allowed users to download and install apps from outside the Nook appstore, including Amazon’s appstore. But then B&N released a firmware update, version 1.4.1, right before Christmas that closed off this functionality and locked the Nook Tablet down from installing non-B&N apps.

Since the update, the only way to install non-B&N apps is to root the Nook Tablet. The good news is the rooting process is relatively simple, and grants access to other benefits, such as getting apps from the Android Market. So let’s get started.

First, I would recommend reading through all the steps and watching the video once before beginning. Some steps aren’t needed for everyone, depending on the results as you go. The trickiest part is installing the proper drivers; I had everything go wrong in that department so all the necessary fixes are included in the tutorial. Oh, and this rooting process is for Windows.

Also, I’m not an Android expert and never will be. All I did was follow the directions from over at XDA. Pretty much everything I know about rooting the Nook Tablet is written below, so I’m not a good person to ask questions if you encounter a problem; I’d suggest hitting the Nook Tablet threads at XDA for troubleshooting.

Root your Nook Tablet at your own risk; I am not responsible if it breaks, blows up, or becomes self-aware and revolts against mankind.

Update: This method works on a 16GB Nook Tablet only! Refer to these directions for rooting an 8GB Nook Tablet.

For this rooting method you need to revert the Nook Tablet back to firmware 1.4.0.

To check firmware version, go to Settings > Device Info > About your Nook > Software Version. If your Nook Tablet is somehow already at 1.4.0 (not likely) you can skip to Step #2. Otherwise refer to this earlier post: How to Restore the Nook Tablet to 1.4.0.

Now that your Nook Tablet is running good ole 1.4.0, it is time to install an app to access the hidden settings menu to enable 3rd party app installs and USB debugging mode.

This was the hardest part for me but for most people it should be relatively simple, depending on what version of Windows you are using. If you are lucky your Nook Tablet’s drive will show up in the Device Manager with a small exclamation point next to it right away so you can skip to Step #4. If not, follow these directions and the video closely to get to that point.

If that works the Device Manager will refresh and your Nook Tablet drive will have an exclamation point next to it. Mine just disappeared entirely and trying over several times resulted the same so I had to move on to the next fix.

Fix B: Download USBDeview. The download link is toward the bottom of the page. Unzip the package and open “USBDeview.exe”. With some version of Windows you have to right-click and run as administrator.

USBDeview shows all the USB devices on your computer. Hit the find button and search for “android”. Right-click and uninstall all devices that have Android in the name. I also uninstalled all the ones with Nook in the name but don’t know it that matters or not.

Finally, go back to the Device Manager. If the exclamation point still doesn’t show next to the Nook Tablet drive, wake the Nook from sleep (it should still be plugged into your computer) and go open the Hidden Settings app again. Un-check, then re-check to enable USB debugging (use the one at the top).

A little Android bug should have appeared in the left corner on the Nook’s notification bar and the exclamation mark should now be next to the Nook Tablet drive on the Device Manger list. If not, make sure all the Android devices were uninstalled with USBDeview and try again. If that still doesn’t work try a different computer or hit this USB Drivers help thread at XDA.

1. Download the NookAndZergy.zip file and unzip it to a suitable location on your computer (credit).

2. With your Nook Tablet connected to your computer with the USB cable, double-click the NookAndZergy.bat file that was inside the NookAndZergy.zip file. A window will open. Verify there is a device number under where it says list of devices attached. If so, proceed. If not, the driver software did not install correctly.

3. From here, just read the on-screen directions and make your choices as you go. Rooting is the first step. Then installing Gapps, which is Google apps for the Android Market. It asks to choose from a list of Android launchers to install. You’ll have the option to remove certain apps that come pre-installed on the Nook, and to assign the “n” button. Toward the end you’ll get the option to block OTA updates, which is highly-recommend so your Nook doesn’t automatically install firmware updates, thus breaking root. Once everything is finished the command window will close automatically and you are done.

Note: I encountered a slight problem halfway through #3. After selecting to install Go launcher, the script froze up and stopped doing anything for a few minutes. I left the command window open and unplugged the Nook Tablet from the USB and then plugged it back in. The script then said tap any button to continue and started back up again where it left off.

This video outlines all the steps listed above for rooting the Nook Tablet for those of you that need a visual guide.