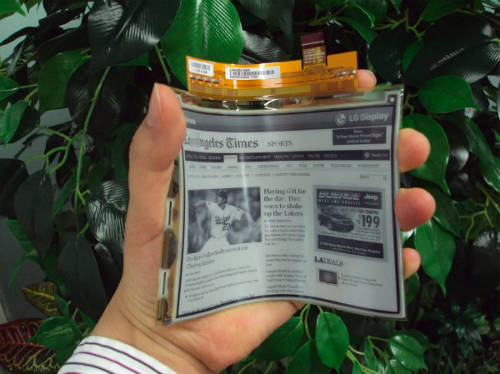 One of the biggest problems with E Ink ebook readers is the fact that they are somewhat fragile, especially when not using a case to keep them protected.

If you accidentally drop your ebook reader, sit on it, or stick it in a bag with a bunch of other stuff, there’s a good chance the screen could crack. This is because the screen’s backplane is made of glass.

For years E Ink has been talking about using plastic backplanes to help mitigate this problem, but LG has beaten them to the punch.

Anyway, the overall thickness of the new display is 0.7mm. That’s about 33% slimmer than existing E Ink displays with glass substrates. It also weighs about half as much. And since it uses plastic it is flexible up to 40 degrees from the center of the screen.

According to LG, about 10% of ebook reader owners have accidentally damaged their screens. With plastic displays, that should no longer be a problem. LG states their new displays can withstand being dropped from 1.5 meters (nearly 5 feet). LG also put it through a break test that involved hitting the display with a small urethane hammer to no ill effect.

Not only is LG’s new epepar display more durable than existing displays, the resolution is higher as well. Instead of 800 x 600, they are 1024 x 768. The iriver Story HD is currently the only E Ink ebook reader using a 1024 x 768 resolution screen.

LG’s new screens are headed to ODM companies in China, with completed products to become available in Europe as early as next month.