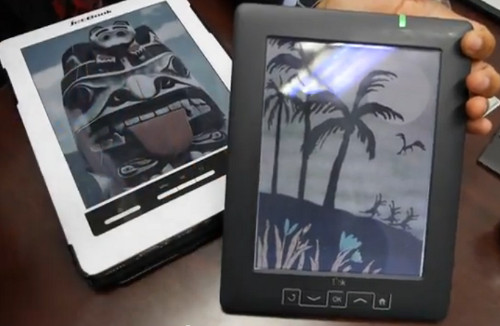 E Ink was at CES last week and as usual they had some demo products to display. E Ink is best known for the screens that they supply for ebook readers. The vast majority of E Ink screens are monochrome, but they also make color screens as well. E Ink calls them Triton displays.

Color E Ink screens have been out for a few years now, but they have yet to take off. The main reason is because colors appear washed out and the screen color is too gray. The less ambient light there is the worse the screen looks.

E Ink has since released an updated version of color displays and are calling them Triton 2. We’ve seen them briefly in videos from past conferences, but this time we’ve got a more in-depth look.

It still remains to be seen if the new screens are going to be more successful than the last. A major hurdle with color E Ink is that color isn’t going to be nearly as bright as people are accustomed to with LCD screens, and then there’s the fact that resolution isn’t as good. It’s even noted toward the end of the video how text contrast isn’t as good on color screens as it is on current black-and-white E Ink screens.