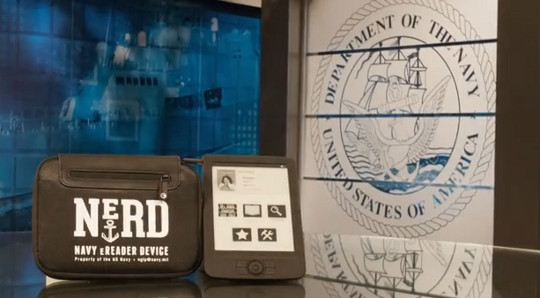 Earlier in the month the Navy’s General Library Program revealed the NeRD, a custom-made E Ink ebook reader made specifically for active military service members while on deployment.

The Department of Defense’s Armed with Science blog posted a video interview with the program assistant for the Navy General Library Program that describes the NeRD and explains how it got started and where it’s going in the future.

The NeRD is a rather bare-bones ereader. It doesn’t have Wi-Fi, a touchscreen, or a frontlight. But it does have a 6-inch E Ink screen, and it comes preloaded with 300 bestselling and classic ebooks, plenty to keep one busy if stuck on a submarine for six months.

In the interview it’s mentioned that the NeRD doesn’t shatter when dropped. Generally E Ink is not shatterproof because glass is used for the back of the epaper display. In fact E Ink screens are known for being somewhat fragile. It’s likely the NeRD uses a plastic epaper screen. They exist but are uncommon. E Ink and Sony’s 13.3″ Mobius screens are plastic-based, for instance.

The first group of service members to get access to NeRDs will be those on sub-marines. The Navy also plans to distribute NeRDs to the surface fleet in the coming months. It’s even possible that other branches of the military could get similar ereader devices too.

If you are curious what the NeRD looks like, there’s a quick look at the device in action at the 1:30 mark.