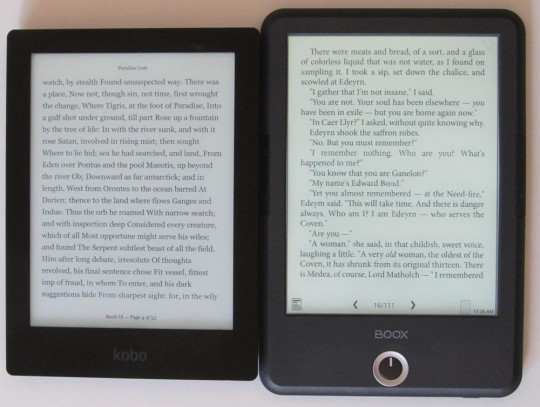 The Kobo Aura HD and Onyx Boox T68 are the only two ebook readers currently available that feature E Ink’s 6.8-inch display, so a comparison review between them is needed to determine which device is better.

Unfortunately that’s not going to happen. I can’t definitively say that one is better than the other. Each device has some clear advantages over the other. It depends on what features are most important to you for an ereader to make that distinction.

Before doing this comparison, I thought that the newer Boox T68 would easily claim victory over the older Kobo Aura HD, but that is not the case at all. The Aura HD holds its ground well, and is in some ways better than the Boox T68.

Both devices are similar in some ways. Aside from having the same 1440 x 1080 E Ink Pearl screen, both feature frontlights and have Wi-Fi, 4GB of internal storage space, a microSD card slot, 512MB RAM, and 1GHz processors. 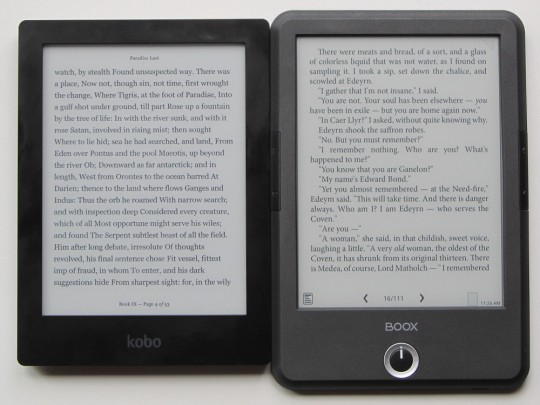 The Boox T68 is more versatile than the Kobo Aura HD. It supports more types of content in the form of Android apps, and it adds audio support, Bluetooth, and physical page and navigation buttons.

The Kobo Aura HD offers a slightly clearer and whiter screen without the capacitive touch layer, and it has a more simplistic interface that’s easier to learn and use. The software isn’t as advanced as Android on the Boox T68, but it’s faster, more stable, and a lot less prone to crashes.