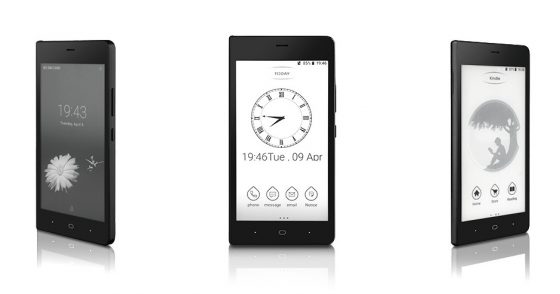 A company called Kingrow is expected to launch a new E Ink smartphone soon called the Kingrow K1 that also doubles as an ebook reader.

Unlike some other E Ink smartphones with two screens—LCD on front, E Ink on the back—the Kingrow K1 is a smartphone that incorporates a single 5.2-inch E Ink screen with a frontlight.

There have been a few E Ink smartphones released over the past several years, but none have been very successful.

The Yotaphone managed to last three generations, but the company just went bankrupt.

Hisense has released a few dual-screen smartphones as well, the Hisense A6 being their latest model.

The Kingrow K1 looks a bit more promising than some of the other E Ink phones because they appear to be focusing more on making the software work with the E Ink screen.

The company is developing their own E Ink optimized software based on Android 8.1. But the device does not support the Google Play Store. It does come with some apps pre-installed, including the Kindle app for reading ebooks, and Kingrow is expected to add their own appstore.

Battery life is expected to last 2 days when using the device as a smartphone, 7 days when used as an ebook reader, and 2 weeks in standby mode.

Kingrow is expected to launch a crowdfunding campaign on Indiegogo in May to fund the production of the K1 E Ink smartphone. The device is reportedly going to sell for around $349, but you can signup for their newsletter to get $100 off.