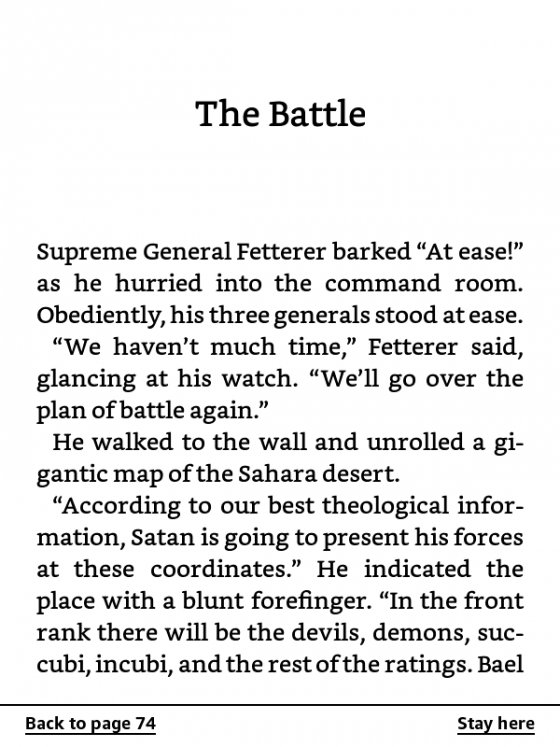 Amazon has released another software update for Kindle ereaders that brings some more changes to the way navigation works when reading ebooks.

The new software version is 5.14.1, up from 5.13.7 with the last update, which brought a lot of changes to the user interface and now they’re attempting to fix one of the main problems created by the last update: the removal of the back button.

Navigation options while reading: You can now navigate more easily within a book that has footnotes, endnotes, bookmarks, notes/highlights, or links.

Basically what they did is add a “back to page” link that appears at the bottom of the screen whenever navigating to a different part of a book.

Now whenever you do things like follow a link, go to a bookmark, use the table of contents, or jump to a different page a “back to page” box pops-up at the bottom of the screen and remains there indefinitely until you use it. You have to either tap a “back to page” link or a “stay here” button to remove the dialog box—there’s no other way to get rid of it. It’s nice if you want to go back right away, but if you want to stay in the new location having to press the “stay here” button every single time gets rather annoying, and it only shows the first page to go back to, not any subsequent pages so it doesn’t mimic the old back button’s functionality.

I’m also encountering a problem where swiping up from the bottom of the screen doesn’t open the page navigation screen half the time, so no wonder people are having problems adjusting to the new navigation options introduced with the last update.

The update still isn’t available for the Kindle Voyage (it’s still on 5.13.6) so it might’ve finally reached the end of the line as far as software updates go, but considering it was released in 2014 it was pretty good it was still receiving new feature updates until now.

The Kindle Paperwhite 3 is still at the last update, 5.13.7, but it often receives updates later than other models so I wouldn’t be concerned about that just yet.

Like usual with Kindle updates you can wait for the update to automatically download and install when connected to WiFi, but that can sometimes take a few months. If you want the update now you can head over to the Kindle Software Updates Page and download the file to manually install on your Kindle (just put it in the root directory of your Kindle and hit the update button in the settings menu).