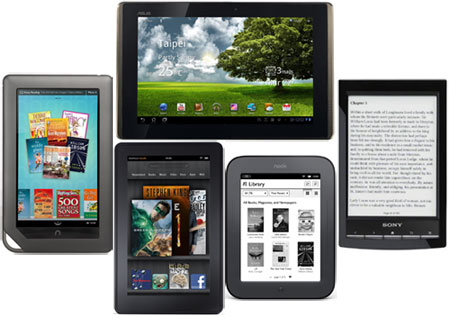 I’ve tested and reviewed a number of tablets and ebook readers in 2011, and as this year comes to a close, I decided to write down a list of my favorite tablets and ereaders of the year, the ones I personally use the most.

I’ve broken down the rankings into three categories: 10″ tablets, 7″ tablets, and 6″ ebook readers, with a couple of honorable mentions thrown in for good measure. So here it is, my favorite ebook readers and tablets for 2011…

I use the Transformer virtually every day for web browsing and online reading, sending and receiving email, moderating comments for this blog, streaming music and videos, writing articles, using ASUS’s really cool SuperNote app, playing games, and I’ve even got it setup to access my Windows computer remotely. The Transformer isn’t perfect (the speakers are absolutely awful; headphones are a must) but it is very reliable and very versatile, especially with the optional keyboard dock.

If you can spare the cash, 10″ screens make for better tablets in my opinion. The added screen real estate really makes a big difference in usability. And the ASUS Transformer is among the best 10″ tablets on the market, and is one of the more affordable 10″ tablets starting at $399. There’s also the new upgraded model, the ASUS Transformer Prime. I’m not going to get one because the Transformer 1 does everything I need and still feels new to me, but the early reviews are saying it is the best Android tablet on the market, and I’m not surprised in the least.

This category was a little harder to choose than the others. There are a lot of good 7″ tablets. But ultimately the Kindle Fire wins for me because it’s fast, it’s open to install 3rd party apps out of the box, it has a nice screen, I do most of my online shopping at Amazon and like the integration of their store and services, and the Kindle Fire is open to hacking so custom ROMs for CM7 and CM9 (Android 4.0) are just around the corner.

Another thing I really like about the Kindle Fire is its compactness. In its Acase cover, the Kindle Fire fits in my jacket pocket and even my jeans’ pockets, unlike the larger Nook Color and Nook Tablet. The ASUS Transformer is nice with its large 10″ screen, but the larger size makes it less portable. When I go out of the house I’d rather stick the Kindle Fire in my pocket and be on my way.

The Nook Touch is my favorite ebook reader and the one I use most simply because it can be turned into an effective E Ink tablet once rooted. Most ebook apps work surprisingly well, making it the ultimate ebook reader overall. And a few app developers have made apps specifically for the Nook Touch. The number of Android apps that will work on the Nook is absolutely amazing.

To be perfectly honest, if I couldn’t root the Nook Touch I wouldn’t want anything to do with it. It’s just too basic out of the box for my needs. How ironic.

There’s no question the Nook Color is one of the best tablets and ereaders of the year (technically it was released in 2010 but I’m not going to hold that against it). Stick an N2A card in it and it is still one of the best budget tablets on the market, especially considering the Nook Color can be had for as little as $129 refurbished. Aside from the Kindle Fire, it is the best tablets/ereaders under $200, and I’ve gotten a fair amount of use from mine this past year so it rightfully deserves a place on this list too.