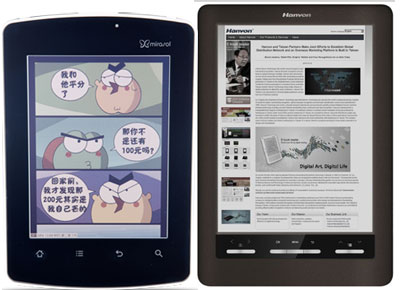 The next obvious step for ebook readers is color. And there are currently three different types of screen technologies trying to bring color to ereaders, Mirasol, color E Ink (Triton), and Pixel Qi.

All three screens differ quite a lot, but there are similarities. Each is meant to be readable outdoors in bright light, each offers color, and all aim to be more energy-efficient than traditional displays.

So the obvious question is: which one is better? Which one is going to win out over the others and become available on your next ereader?

Well, I don’t own a Mirasol or color E Ink ereader yet, but I’ve had a Pixel Qi tablet for about 1 year now (the Notion Ink Adam) and can safely say Pixel Qi is not the answer (here’s my Pixel Qi review, comparing it with E Ink and LCD).

The fact that Pixel Qi is readable outdoors in sunlight is a benefit but it has poor viewing angles and is no where near energy-efficient enough to ever be useful for ebook readers. The Adam gets about 5-6 hours of battery life normally and only about 7-9 hours with the backlight turned off entirely. That pales in comparison to color E Ink and Mirasol, both of which can get up to 3 weeks on a charge. Pixel Qi is better suited for tablets than ebook readers.

The race is a lot closer between Mirasol and color E Ink. Like I said, I haven’t tested either in person yet, but Nate from over at The Digital Reader posted some pictures, a short video, and some thoughts comparing the two. Here’s a quote:

As for me, I could clearly see a difference when I had both screens in front of me.The Mirasol screen had better color quality – but only in the narrow 20% viewing angle. In that small region, Mirasol showed colors that were both stronger and sharper, while the E-ink screen looked distinctly washed out in comparison. But outside that region the color E-ink screen had better color. And of course neither compares well to LCD, but of course we expected that.

Mirasol and color E Ink have been trying to go mainstream for quite a while now, but neither have really caught on. There are a few Mirasol ereaders on the market, none of which are being sold in the US. There are a couple of devices using color E Ink screens, but only one is available in the US, the jetBook Color, and it costs $500 and is mostly aimed at the eduction market.

Perhaps it won’t be Mirasol, E Ink, or Pixel Qi on the ereaders of the future. Maybe it will it be something entirely different.

Here are some videos from CES that explain more about Mirasol, E Ink, and Pixel Qi and show them in action.