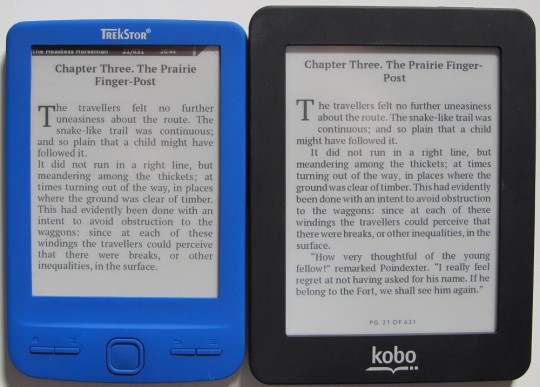 Earlier this month I posted an article about the Trekstor Pyrus Mini ebook reader. Not only is it the world’s smallest dedicated ereader with its 4.3″ screen, it’s also one of just a handful of ebook readers to ever use an epaper screen not produced by the company E Ink.

All the Kindles, Nooks, Kobos, Sonys, and many others of the world use the same exact type of epaper screens from E Ink. In fact E Ink pretty much has zero competition in the field of monochromatic electronic ink displays.

The only other epaper screen technology to make it onto ebooks readers was SiPix, like with the Pandigital Personal ereader I reviewed back in 2010, but screen contrast wasn’t very good, and E Ink recently bought the company out to squash hopes of any future improvement.

Now enters Digital Ink made by Guangzhou OED Technologies in China. Truth be told, the main reason I decided to buy the Trekstor Pyrus Mini from Amazon UK was to get a closer look at this new type of epaper screen technology to see how it compares to E Ink.

Surprisingly, Digital Ink looks every bit as good as E Ink to my eyes. In fact they could have called it E Ink and I probably wouldn’t have known the difference. The screen is easily readable in bright sunlight. Contrast is excellent. Text is nice and crisp and dark. And I mean really crisp because it has the same 800 x 600 resolution as larger 6″ ebook readers for an impressive 232 dpi, which is 20 dpi better than the best 6″ screens from E Ink.

If I were picking hairs I would say the background color of the Digital Ink screen is a tad yellower under bright light compared to the latest Pearl screens from E Ink. It reminds me a little of E Ink’s older screens, called Vizplex, in that regard. But text appears darker on this Digital Ink screen than the Vizplex screen on my PocketBook 602.

Overall I’d say the Digital Ink screen falls in between Pearl and Vizplex, although it’s really difficult to tell because of various factors. For instance, in the picture above comparing it with the Kobo Mini, the Kobo has bolder fonts so that makes it look better than it really should. If I could put that same exact font on the Pyrus it might look just as good or better. It’s hard to say.

One thing I noticed that Digital Ink doesn’t seem to do as well with is partial page refresh. When using partial refresh there tends to be more noticeable ghosting where the text and images from the previous page show slightly after turning pages. At least I don’t notice any ghosting with it set to refresh every page.

Speaking of page refresh, the Digital Ink screen on the Pyrus Mini turns pages slightly faster than the Kobo Mini, but is slower than page turns on the latest basic Kindle.

When it comes down to results, Digital Ink is definitely a worthy competitor to E Ink. It looks every bit as good when it comes to displaying digital text, and is reportedly $5 – $10 cheaper per display, which is fairly significant. The only problem is E Ink is suing Trekstor for patent infringement for using this screen so however that lawsuit turns out will undoubtedly have an impact on the future of Digital Ink.

P.S. I’ll post a review of the Pyrus Mini soon. For this article I wanted to focus on the screen tech it uses.