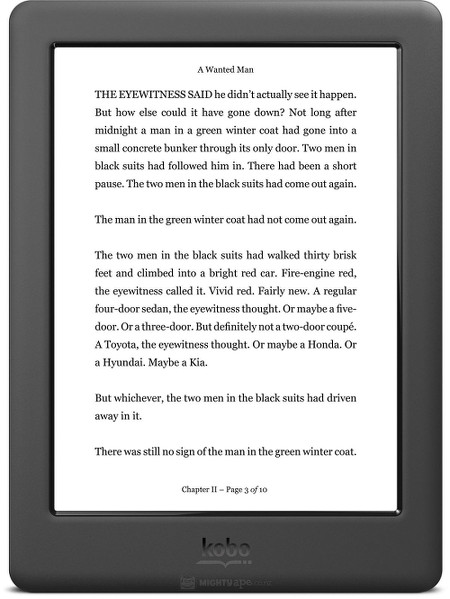 An online retail website in New Zealand called Mighty Ape has revealed details about Kobo’s newest ebook reader ahead of any official word from Kobo about its release.

Update: Kobo made the announcement official on April 7th. See the next post for the full details: Kobo Glo HD Will Cost $129, Releases May 1st.

The new device is called the Kobo Glo HD. It has a 300 ppi E Ink Carta screen, the same kind of screen that comes on the Kindle Voyage.

According to the listing at Mighty Ape for the new Kobo Glo HD, it is expected to be released on May 1st, at least in New Zealand, along with an auto wake/sleep cover.

The premature listing brings up more questions that it gives answers, however.

There’s not a lot of details, just a few very predictable specs, like the 300 ppi screen resolution that was already discovered in a recent firmware update under the codename Alyssum. There’s another device codenamed Pika with an 800 x 600 resolution screen, but it hasn’t been spotted anywhere online yet.

One thing that jumps out about the description and specs is there is no mention of a microSD card slot or expandable memory. None of the pictures show any of the edges to see if it has a slot or not.

It might just not mentioned in the brief description, but there’s a chance the Glo HD doesn’t have a memory card slot like the Kobo Mini; that will be something to look for when Kobo makes the official announcement.

There’s also this somewhat odd marketing video for the Glo HD that turned up on YouTube a couple days ago.