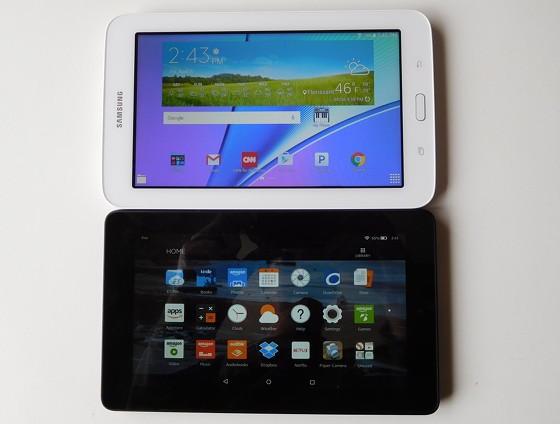 Samsung released a new 7-inch Galaxy Tab E Lite a couple weeks ago. Initially it was priced at $119 but it’s already on sale for $99, which makes it the lowest priced Samsung tablet ever.

The Galaxy Tab E Lite is very similar to the Fire tablet in terms of hardware. Both are almost the exact same size, both have similar screens and their overall specs are practically identical.

Like usual, the biggest difference between these two tablet brands comes down to the software.

The Galaxy Tab E Lite runs open Android 4.4 KitKat and includes all the usual Google apps and features out-of-the-box, and comes with Samsung’s added software features like multi-window mode, whereas Fire tablets run Amazon’s customized Android software that has more limitations, although it’s a lot better and more open than it used to be.

Check out my $49 Fire tablet review and Galaxy Tab E Lite review for more details about each device and to watch video walkthroughs.

There’s also the new 7-inch Galaxy Tab A that replaced the Tab 4. It has a number of upgrades over the Tab E Lite and it’s only like $30 more. I’ll be posting a review and comparison of it next week as well.