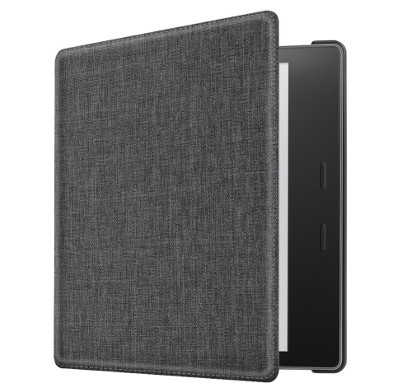 I decided to get one of the CaseBot fabric cases for the Kindle Oasis 2 to see how it compares to Amazon’s fabric cover that originally sold with the Kindle Oasis when it first came out, which I reviewed a few months back.

Both covers are similar in texture and feel, but the CaseBot case covers the entire Kindle, minus cutouts for the power button and USB port, whereas Amazon’s cover only partially covers the device.

The CaseBot covers are cheaper than the Amazon covers at $45 for fabric and $60 for leather.

Amazon started suggesting the CaseBot covers in the add-on section for the Oasis after they stopped selling their own covers.

The quality of the fabric on the Amazon cover feels a bit nicer to me, and the stitching feels tighter, but the CaseBot case offers more protection by covering the sides and back of the Oasis.

The inside material has a soft rubbery feel to it that provides a good amount of grip when you fold the front flap back to hold with one hand.

My biggest complaint with the CaseBot case is just how thick it feels when you have the front folded back. It’s nearly twice as thick as holding the Oasis on its own without a cover. That’s the thing with the Kindle Oasis: it’s designed to be held without a cover—that’s why Amazon’s covers are meant to be easily taken off when reading.

It’s not hard to get the Kindle Oasis out of the CaseBot case but it’s probably not something you would want to do every time you pick up the device.

One thing that surprised me is the fact that the two covers weigh almost exactly the same. The CaseBot cover is larger and bulkier, yet it only weighs about 1 gram more than the Amazon cover.

In short, the CaseBot cover is probably going to be a better option if you plan on taking your Kindle with you a lot and are going to be putting it in a bag or purse. Personally I like the style and feel of the Amazon cover a bit better, but it doesn’t really offer much protection.

Another thing I like about the CaseBot case is the fact that it covers the metal back and sides on the Kindle Oasis 2, which tend to get pretty cold at times (especially during winter). But the downside with that is the Kindle Oasis might as well be made out of cheap tupperware if you’re going to cover it up all the time.

Here’s a video review for a closer look, and here’s the link to my Amazon cover review from earlier.