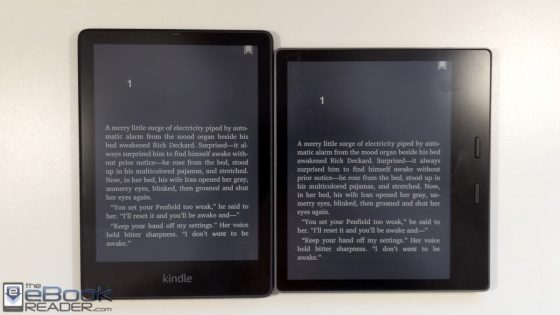 Here’s a quick comparison review between the new 6.8-inch Kindle Paperwhite for 2021 versus the 7-inch Kindle Oasis that was released in 2019.

As noted in an earlier article, the Kindle Oasis no longer makes sense up against the new Paperwhite considering it’s supposed to be Amazon’s premium Kindle.

The Kindle Paperwhite 5 has more advantages now and it’s considerably cheaper so I don’t see the Kindle Oasis 3 staying around for much longer in its current configuration. I bet it either gets discontinued or replaced in the next six months, especially since the design has remained unchanged since 2017.

There’s really not a lot to compare since they both run the same software. The one difference is the Kindle Paperwhite 5 has a new page turn animation setting, but I wouldn’t be surprised if that makes it to the older models as well at some point.

The only notable difference that I can see when comparing the two screens is there’s more ghosting (afterimage effects) on the Oasis. Looking back at my Oasis review from 2019, I talked about ghosting being more noticeable than usual. At the time I just thought it was a software issue that would get resolved eventually but it never has. I haven’t noticed any ghosting at all on the Paperwhite 5.

The frontlights are both very comparable on the two units. The light on the Oasis does get a bit brighter at the highest setting, but the colors and evenness are about the same.

Since the software is nearly identical on both, and the screens and frontlights are very similar, it mostly just comes down to the differences in the design and the few new upgrades on the Paperwhite 5.

The Kindle Oasis is still one of the nicest ereaders in 2021, but the Kindle Paperwhite 5 adds some new features that might make it hard to justify spending more on the Oasis, especially with its old micro-USB port and poor battery life.

Personally, I would have a hard time paying full price for an Oasis at this point, but I like having page buttons so I do still like it a bit better. I just hope Amazon doesn’t discontinue the Oasis like they did the Voyage. I think they should always offer a model with page buttons.