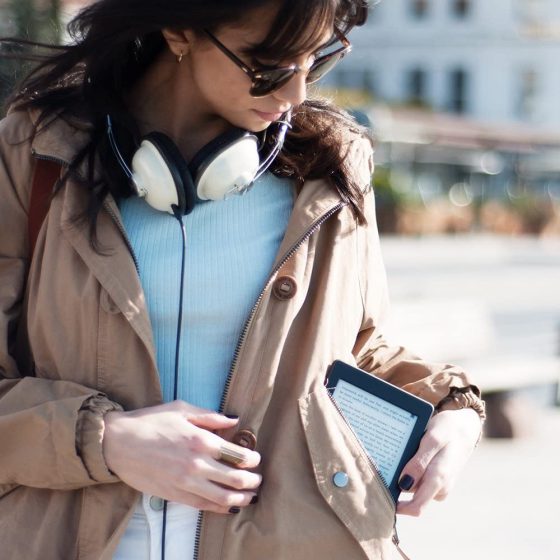 One thing that has definitely changed in recent years when it comes to dedicated reading devices is the portability factor.

For a long time most ereaders came in smaller 6-inch sizes, and there were even a few with 4-inch and 5-inch screens, but now there are a lot more ereaders with wider asymmetrical designs and larger screens that are harder to take with you because they’re too big to comfortably fit in a pocket.

Most people probably rely on reading on their phones instead carrying a second device, but that doesn’t work if you’re reading outside in the sun. Even at full brightness an LCD screen can’t compare with an E Ink screen under bright light—it’s not even close.

If you follow this blog, you know I’m a big fan of ereaders with larger screens and I’ve been critical of Amazon for years for ignoring this market. Not everyone has great eyesight and a lot of people only read at home so having a small portable ereader doesn’t make much sense.

Lately, I’ve been using the Kindle Voyage a lot because I often read while walking, and I really appreciate its smaller size because that makes it more portable than current models, except the entry-level Kindle but the Voyage is ten times better despite being much older. And that’s part of the issue: most smaller ereaders are now low-end budget models with inferior screens and less features than larger models. That’s why I wouldn’t mind seeing Amazon release another premium 6-inch Kindle with page buttons, but that’s probably never going to happen.

Ultimately I think that having one small ereader for portability and one larger ereader for reading at home is the best option, but that’s probably not practical for some people.

It’s probably a bit different for ladies that carry purses, but for me if an ereader doesn’t fit in a pocket it’s staying home. I like asymmetrical devices like the Kobo Libra 2 and Kindle Oasis, but they’re just too wide to comfortably fit in most pockets.