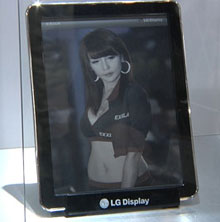 The first LG color epaper prototype has a 9.7-inch display with a pixel resolutions of 800 x 600—seemingly low for the large screen size. The same goes for the E Ink screen used on the new Hanvon color ereader.

The second LG epaper screen demoed is a hybrid creation that uses a monochrome epaper display on the upper three-quarters of the screen with a color section below it. It’s pretty strange-looking, to say the least. The display resolution for it is 1,200 x 1,200 for the monochrome part and 200 x 600 pixels for the color section.

The fact that it uses a black and white screen along with a color one brings up some obvious questions. Can’t the color display handle black and white? What’s the deal with that? Are they implying that contrast won’t be as good for regular black text on a whitish background with color displays?

Granted it’s just a prototype, but it doesn’t really make any sense to go through all of the trouble to have a color display just to put a monochrome one over most of the screen. It would serve little to no purpose for color illustrations in books, newspapers, magazines, etc.

The beginning of the video shows E Ink’s new Triton color epaper that was unveiled earlier in the week. The two LG epaper displays are shown toward the end of the video.

Update: Added the second video for a closer look at the color display and refresh rate.