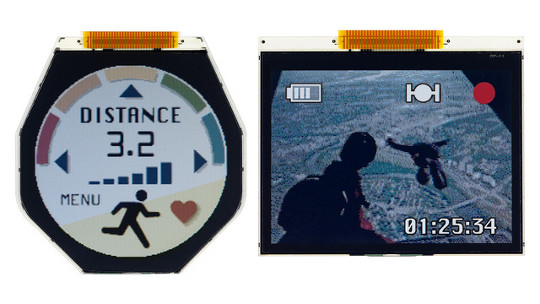 Last week Japan Display announced that they’ve started mass-producing a new type of energy-efficient LCD display that could potentially be used for ebook readers in the future.

The new display technology shares some similarities with E Ink—being low-power and outdoor readable—and could prove to be a worthy alternative.

What’s most interesting about these new LCD displays is that they use a Memory-In-Pixel (MIP) reflective-type LCD module. This makes it so that a static image can be held on the screen without consuming energy, just like E Ink.

In addition, these reflective style displays show images and text by reflecting ambient light, similar to Pixel Qi‘s screen tech. Even though the screen is LCD, there is no backlight to consume power or light up the screen.

Reflective LCD screens have been used on ereaders in the past on devices like the Aluratek Libre, but those were monochrome and not very energy efficient, and certainly didn’t use Memory-In-Pixel technology.

These new MIP displays are color and even have a higher contrast ratio than E Ink at 20:1 (E Ink’s latest Carta screen tech is 15:1 and their color Triton screens are only 10:1).

Right now these new low-power LCD displays are only being made in very small sizes at 0.99″ and 1.39″, so it doesn’t look like we’ll be seeing them on ereaders anytime soon, but the possibility certainly exists. It will be interesting to see how the technology progresses and if it transfers well to larger screens for ereaders.

Japan Display has been working on these for a couple years at least because they demoed some larger displays back in 2012 (here’s a video), albeit without the new nifty MIP tech.