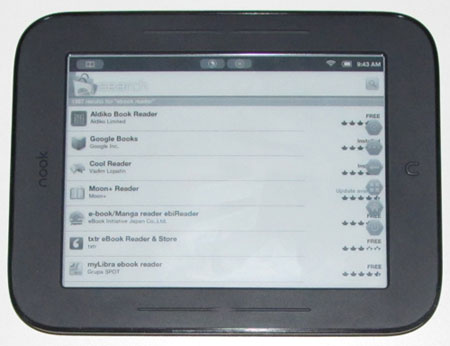 E Ink ebook readers have been on the decline for the past couple of years, and innovation has slowed to a crawl thanks to Amazon’s utter dominance of the ebook market.

If you happen to live in Europe or parts of Asia there are lots of choices for ebook readers, but in the United States the evolution of ereaders not named Kindle has come to a virtual standstill.

A couple years back the idea of an E Ink tablet had some promise. But unfortunately that kind of product has yet to come to fruition. Onyx has some new Android-powered ebook readers that run Android 4.0. They even come with Google Play access to install apps, effectively making them E Ink tablets, but of course if you live outside of Europe they are probably going to be pretty hard to get.

If you want an E Ink tablet in the US there are only a couple of options. You could get a Kobo Aura HD, Kobo Glo, or Kobo Touch and install the Android hack based on the Tolino Shine firmware, which runs Android 2.3.4. I installed this on my Kobo Glo and it works pretty well; I’ll post a review next week with a video walkthrough.

The Kobo option isn’t cheap, however. For that you need to go the Nook route. The Nook Touch has been out since 2011 so it can be had for pretty cheap, and it’s still one of the best ebook readers that you can turn into an E Ink tablet.

Right now Office Max has the Nook Simple Touch on clearance for just $35, and that’s new, not refurbished.

Hacking a Nook Touch to turn it into an E Ink tablet is surprisingly simple. Basically all you need is a computer with a couple of free programs installed, a microSD card, and 10-20 minutes. There’s even a tool called NookManager that makes the process even easier.

It’s not hard to turn a Nook Touch into an E Ink tablet, and now that they can be had for as little as $35 the risk is minimal. The main downside, though, is the Android version is so old. The Nook runs Android 2.1, which is pretty ancient by today’s standards, and that leads to a lot of app incompatibilities because a number of apps don’t work with firmware that old.

The Nook Touch with GlowLight can also be hacked to run Android the same as the original Nook Touch. The contrast isn’t as good because of the light layer, but the added frontlight does have its benefits. The new GlowLight Nook can be hacked as well, but it requires specialized technical know-how, and development isn’t nearly as advanced as the older Nooks.