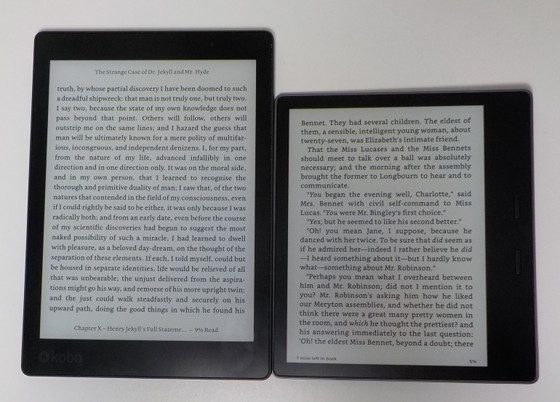 Now that Amazon has released the 7-inch Kindle Oasis 2, there’s finally a larger Kindle to contend with the 7.8-inch Kobo Aura One.

The size of the new Oasis is actually closer to the 6.8-inch Kobo Aura H2O, and I show it briefly at the end of the video review to give an idea of the size difference, but overall the Aura One is the more comparable model to the Kindle Oasis.

Both are each company’s top of the line model, and both are similar in quality and price.

They share a number of the same features. Both come with 8GB of storage space, with the option to upgrade to 32GB.

Both are waterproof with an IPX8 rating, both have frontlights, 300 ppi E Ink Carta screens, Wi-Fi, auto-adjusting light sensors, and a number of similar software features.

It would take too long to go over every feature but you can find full reviews and videos on the main review pages for the Kobo Aura One and Kindle Oasis.

The Aura One’s software has changed some since that review was posted. It runs smoother now and the touchscreen is more accurate thanks to the latest update. Things like highlighting, zooming, and scrolling work better than they used to. However, I still have problems borrowing library ebooks through Overdrive; half the time it gives an error or shuts down and reboots.

Awhile back I named the Kobo Aura One my favorite ereader of all time. I like the larger screen, the font choices, and the Overdrive integration, but it’s not perfect.

I really like the added page buttons on the Kindle Oasis. For me being able to rest a thumb on a page button is more comfortable than adjusting to swipe the screen with every page turn, but I’m still not sold on the unusual tapered design. It doesn’t help make it feel lighter than the Kobo Aura One. To me they feel about the same weight in-hand, but the Aura One actually weighs 36 grams more.

At this point I can’t recommend one over the other because I still need more time with the Kindle Oasis, but so far I really like the screen and frontlight a lot, and the performance is little zippier than the Aura One. I’ll update this after posting the full review.

Here’s a list of the main differences between the Kindle Oasis 2 and Kobo Aura One. More software-related features are outlined in the video, but I had to edit a lot out because it was getting way too long.

Screen – The Kindle Oasis has a 7-inch E Ink Carta display and the Kobo Aura One has a 7.8-inch E Ink Carta display. Both have flush glass screens, capacitive touchscreens, and 300 ppi. Kobo ebooks have headers and footers and Kindle ebooks do not, so the area of text shown is similar in size, but the Aura One’s screen is bit wider and you can set the margins tighter to the edge to fit more text on-screen. There’s also a fullscreen patch to get rid of headers and footers (not sure if it still works), and sideloaded ePubs don’t display headers.

Frontlights – Both have nice frontlights but the Kindle’s is very evenly lit and it’s a touch brighter and lighter in tone at higher settings, and a little more yellow in tone at lower levels. The Kobo Aura One adds the option to change the frontlight color temperature from a cool blue to a warm orange, but the orange setting has some lighter areas on mine (frontlights vary greatly however so they’re probably all different anyway). Both have a sensor to automatically adjust the frontlight based on the amount of surrounding light.

Fonts and Layout – One big advantage for Kobo is you can fine tune fonts and layout more than on Kindles. Amazon recently added some new bold setting and extra font sizes to Kindles, but Kobo still offers way more control over fonts and layout, and you can even add additional font types.

OverDrive – The Kobo Aura One has OverDrive support built-in to easily download free library ebooks directly to the device without having to use a computer or other device. The Kindle Oasis supports library ebooks from Overdrive as well, but you have to use a separate device to browse and checkout the books.

Patches and Apps – Kobo’s ereaders are open to adding extra features and reading apps. See the Kobo Aura One KOReader Review for a look at an alternative reading program that works well for PDFs. Kindles are capable of the same kinds of things but they have to be jailbroken first and that’s not an easy task.

Wireless – The Kindle adds the option for “free” cellular connectivity, 4G LTE in the US and 3G in other areas. It’s free in that there are no monthly fees but the initial cost is higher. The 32GB cellular Kindle Oasis sells for $349.