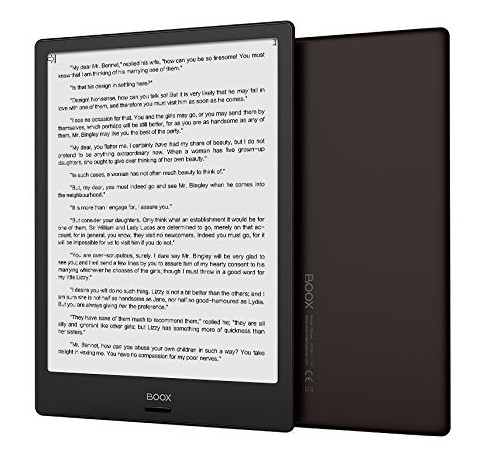 There are a few new 10.3-inch E Ink ereaders and digital notepads expected to get released this year.

The 10.3-inch screens are a new size from E Ink, and they’re flexible so they are a lot lighter and more durable than regular glass-based E Ink screens.

Released last fall, the Remarkable was the first device to feature a 10.3-inch E Ink screen, and they’ve reportedly sold over 50,000 units so they’ve proven there’s a market for these types of devices.

Now some new models are starting to get released. Here’s a list of what’s shown up so far:

Onyx Boox Note – The latest new device from Onyx features a 10.3-inch E Ink screen. It just started shipping this past month in limited quantities. It has impressive specs and the most advanced software on this list. Check back soon for a full review.

Sony DPT-CP1 – This model is expected to get released in early June in Japan and on June 21st in the US. Last year it was the same story with the larger 13.3-inch Sony DPT-RP1.

Remarkable – Best suited for taking notes and creating sketches, the Remarkable was the first 10.3-inch E Ink device to get released. It also doubles as a basic ereader.

Boyue T103 (aka Likebook Note) – This model first appeared in 2016 as a prototype and it still hasn’t been released, but they keep saying it will be available “soon”. I don’t read Chinese so it’s hard to tell for sure but the pictures on the website make it look like it has a frontlight. The specs and software are outdated, especially compared to the Onyx Boox Note, but if it has a frontlight that would help make up for other deficiencies.

Jezetek P10C – A prototype of a 10.3-inch E Ink device was among some new ereaders recently shown in a YouTube video from a company called Jezetek. One unique thing about Jezetek’s P10C model is the fact that it has a frontlight. But I’ve never seen Jezetek ereaders being sold anywhere so the likelihood of this model becoming available to purchase anytime soon is slim to nil.