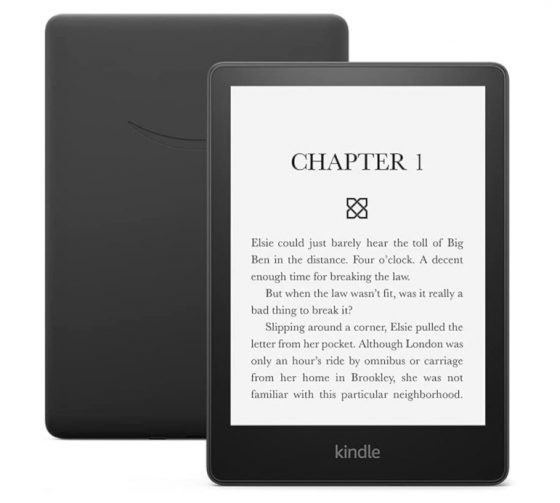 The main thing that sets the new Kindle Paperwhite 5 apart from earlier models is a slightly larger 6.8-inch E Ink screen instead of the standard 6-inch screen that Kindle Paperwhites have had since 2012.

This new model also adds a warm frontlight so you can adjust the tone of the frontlight color from a cool color to a warm color like the Kindle Oasis has had for the past couple years.

The new Paperwhite adds a USB-C port as well and it’s the first Kindle to support 5.0 GHz WiFi networks. It’s also waterproof like the Paperwhite 4 and it has the same flush front screen.

The new Kindle Paperwhite sells for $139 with ads, $159 without. Additionally, there’s a Kindle Paperwhite Kids version that sells for $159. It’s the same exact Kindle as the base model and it’s actually a better deal because it comes with a cover, no ads, and a 2-year warranty. There is no difference between a kids version and a regular Kindle—it’s just marketing. In fact, I’m using the kids model in the video review below because I can’t stand ad-supported Kindles and it’s the same price as the non-ad version.

There’s also an upgraded model called the Kindle Paperwhite Signature Edition for $189 that adds 32GB of storage space, wireless charging, and an auto-adjusting frontlight. It doesn’t have ads either.

The Kindle Paperwhite 5 is the first Paperwhite model to actually include some worthwhile upgrades over the previous generation—it’s not just marketing gimmicks this time.

It’s nice to finally to have the option to use a warm frontlight on a Paperwhite model, and I like how text lays out on the larger screen. The performance boost is noticeable as well, and the addition of a USB-C port and dual-band WiFi support are important upgrades too.

The only thing I don’t like about the Paperwhite is how Amazon insists on putting a flush plastic layer over the top of the E Ink screen. They should offer a version without a flush front screen to maximize screen clarity and contrast—I could care less if it’s waterproof or not.

The Kindle Paperwhite 5 basically has the same design as the previous Paperwhite model, it just has smaller bezels and is about a quarter of an inch taller and wider because of the larger 6.8-inch display.

The flush front screen looks and feels nice but it’s more prone to fingerprints and smudges than most other devices, and so is the soft coating on the back, it seems.

I thought the smaller bezels might make it harder to hold from the sides without accidently activating the touchscreen, but I haven’t had a problem with that, and you can turn off the touchscreen for everything but page swipes if that is a problem. I tend to hold it from the bottom more than the sides, but the only problem with that is it’s not uncommon to accidently press the power button.

One thing about the Paperwhite’s design is the build quality feels nice and solid in your hand. There’s no flex or creakiness to the casing, and it doesn’t have that cheap plastic feel like some ereaders. It looks and feels like a quality device, despite not being a “premium” model like the Kindle Oasis.

Probably the most noticeable difference with the new Paperwhite is how much faster and more responsive it is than the older models thanks to some hardware upgrades. Page turns, opening menus, navigating the interface, running searches, opening books—everything is faster.

Amazon claims the new Paperwhite’s battery can last for up to 10 weeks, compared to 6 weeks on the previous model. Battery life does seem excellent so far, especially coming from the Oasis, but it’s hard to fully judge after just a few weeks.

The main difference with the new Kindle Paperwhite is the fact that it’s the first Kindle to use a 6.8-inch E Ink screen. Earlier Paperwhites and most Kindles in general have 6-inch screens so the new one is slightly larger.

The new Paperwhite still has the same flush plastic layer over the screen like the previous Paperwhite 4, and it still has 300 ppi, but contrast is a bit better on the new screen, resulting in darker blacks.

Something about the plastic layer is more fingerprint prone than other flush screens, and it also adds a subtle cloudiness to the screen that I don’t like, but overall the screen does look a little better than before.

I wish they’d offer a version without a flush screen, or at least do whatever they did to the Kindle Voyage’s screen to make it look so crisp and clear. The new Paperwhite is better than the Voyage in virtually every way, but here we are 7 years later and it still cannot match the Voyage’s screen. Contrast is better compared to the previous model and the larger display is nice, but it’s just weird how screen clarity peaked in 2014.

On the positive side, the frontlight is very evenly-lit, with a nice neutral tone on the cool end, and the addition of the warm light lets you customize the color of the frontlight just like the more expensive Kindle Oasis. The new E Ink screen on the Paperwhite also has much less ghosting than the Oasis. 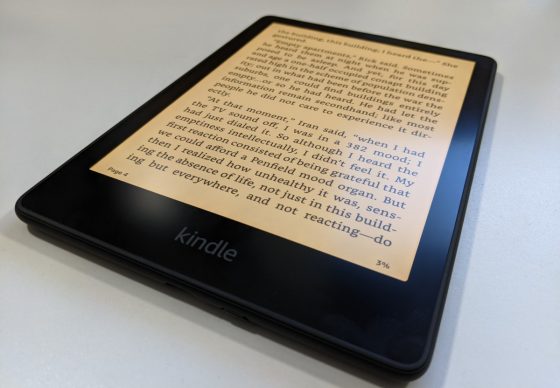 Before releasing the new Kindle Paperwhite, Amazon started rolling out a new user interface on all Kindles dating back to the Paperwhite 3 from 2015.

Since the 5.13.7 software update, all modern Kindles pretty much have the same exact software features.

The one difference with the new Paperwhite is the addition of a page turn animation setting that you can turn on and off under the More tab in the font menu. It adds a subtle animation that goes across the screen to indicate a page turn. It’s much less annoying than the full page flash normally associated with E Ink screens.

Otherwise the Paperwhite 5 has all the same software features added to earlier Kindles, including Dark Mode for white text on a black background. I’ll post a separate review soon listing all the current software features on Kindles.